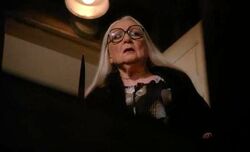 #186: Being mean to a Crazy Witch Lady is the item when Earl was so cruel to a certain old woman named Grizelda Weezmer who was yet better known to him and his hometown of Camden County as the Crazy Witch Lady. Earl wanted to make it up to her. He than asks her her name. Since nobody ever bothered to ask for her name before, she said "I'm Grizelda Weezmer". Earl was a bit confused and Grizelda knows that because her her full name doesn't help things much. she's immediately smitten and invites Earl over for tea.

Next day at Grizelda's house, Randy refuses to go in. He doesn't want to be turned into pudding (courtesy of the dangers inside the Ginger Bread House from Hansel and Gretel), and he especially doesn't want Earl to be turned into pudding because he simply can't resist pudding. Who can? Well, maybe vanilla pudding with little mustache hairs in it he could resist, but chocolate even, never.

Earl and Grizelda are having a lovely tea party and she shown Earl her teeth which happens to be her mother's teeth before the roofie in his tea kicks in and Earl passes out like a co-ed at Spring Break. Grizelda chains Earl to a post in her basement. Earl wanted an explanation as to why he's in her basement, all chianed up. Grizelda tells Earl that his apology brought back all of her repressed feelings of anger and now she wants revenge on everybody who's ever wronged her. Her somewhat immortal words to imprisoned Earl were: "You little scamp, you'll never gonna see daylight again."

Eventually Randy gets worried because Earl hasn't come out yet so he knocks on Grizelda's door, visions of pudding dancing in his head. She invites Randy in, tempting him with video games, wrestling action figures, dirty movies and peanuts. When he heard her said peanuts, he says "I'm comin' in!" and fell for her trick. Moments later, Randy tumbles down the basement stairs, enshrouded in a burlap sack, his shoes sticking out, and soon finds himself chained to Earl's post. The Crazy Witch Lady (Grizelda) just loves the look of terror in a fresh victim's eyes. It's very much what she imagines an orgasm might be like.

Randy's crime against Grizelda which led him to her another victim was that he threw a bucket of water on her and yelled "Come on! Melt, Bitch!" which kind of reminsincing the water which is still the weakness of and terrible demise of the Wicked Witch of the West in the Wizard of Oz. Randy thought it was a plan to get rid of the Crazy Witch Lady once and for all

Moments later, there were two more sacks tumbling down the stairs. It was both Gay Kenny and Stuart Daniels, Camden County's poster children for same-sex marriage. Kenny knows he never did anything wrong to Grizeld, but Stuart can't exactly make that same claim. While he was a deputy, he just may have called Grizelda Weezmer aka Crazy Witch Lady a "whack job". Trying to calm down his life partner, Stuart tells Kenny "Be strong, Bear Cub".

Back at the Crabshack, Joy is explaining her inner niceness to the lovely Catalina. Catalina couldn't agree more, saying "Niceness is always best when nobody can see it". Joy than feels a tappy-tap on her shoulder, and turning around she sees Crazy Witch Lady. The word "Witch!" escapes Joy's lips before she can bite back on it. But Grizelda just wants Joy to come to her house to do her a favor. "Why of course I will do you a favor, ghoulish old lady." says Joy because she believes she's a nice person and favors are what nice people do. Darnell while bartending the Crabshack, still doesn't agree with his wife. The next thing, it's another burlap sack falling down the stairs and there's pink sneakers sticking out of a burlap sack. "Oh my God it's Joy." says Randy to Earl.

The imprisoned Camden County Brain Trust has yet to come up with an escape plan, well, a workable escape plan, and this comes as no surprise to Joy. Earl would like to hear a plan from Joy. She says "Nope. Seems like you guys covered every reasonable plan. All that's left for me is be dummy and call 911" and picked up her cellphone. She tries to call the Sheriff, but it's after 3:30 on a Friday, and they've all gone bowling. So she calls Darnell. And the next thing happened, it's another one falling down the stairs and there's Darnell's cell phone ring tone with Shaft theme emanating from out of a burlap sack.

Since everybody else had done something mean to the Crazy Witch Lady to get themselves into this predicament, Joy is convinced that Darnell aka Mr. Nice must've done something mean too. Joy says to Darnell "Who's the black calling the kettle pot, now?" and demands an explaination for everybone here. But Darnell's transgression was strictly a Three's Company-like miscommunication. A certain patron at the Crabshack asked Darnell Who's that lady. And seeking clarification, Darnell asked Which lady? Well, CWL thought Darnell said "Witch Lady" and hilarity and a ceramic rooster to Darnell's cranium (he wouldn't drink the tea) ensued.

As the chained gang swims in collective misery, the door at the top of the stairs opens, and it was the lovely Catalina to the rescue! She floats like an angel down the stairs and suddenly, chains herself to a pipe. Back then while still in Camden, a superstitious Catalina had told a very sad story to Crazy Witch Lady, and when she wept a tear of sorrow, Catalina scooped up that witch's ear in a little jar to gain immortality contrary to the Belief of the "Witch's Tear" that if you grab hold of a tear of a sorceress (witch) and consume it, you shall gain eternal life. and sympathetic Catalina was smitten by Grizelda's resemblance to her aunt, so Catalina voluntarily chains herself up, and here she is.

Moments later and there's another person kidnapped by Grizelda and fell down the stairs and this time, it was Patty the Daytime Hooker. Originally, in spite of her being watched and stalked by the old woman, she did take her dad's side of the divorce long ago, meaning the Crazy Witch Lady is her mom.

But this latest development presents a problem, Grizelda explains: She's running out of room. Now somebody is going to have to die ("I'm just gonna stab and stab and stab until you're dead...") in order to make more room for her more victims. She lets her prisoners decide who it's going to be. The inmates resort to labels to make their choice and de-humanize the intended victim: Joy = Bitch, Stuart = Kenny's Bitch, Patty = Whore, Randy = Dumb Guy, Catalina = Stripper (that was particularly harsh), Darnell = Nice Guy, Earl = Friggin' Karma Zombie.

Earl recognizes that labeling people like this is exactly what they did to Grizelda, and that's why she's crazy. So he stands up and volunteers, knowing that she won't kill him. He couldn't've been more wrong. She sticks a kitchen knife in his gut. Turns out the Crazy Witch Lady actually is homicidal and crazy. Patty flings her shoe, knocking out her mother and shouts "Sorry, Mom!", and the gang is freed.

Grizelda finally gets the psychiatric help she needs at a home for the mentally insane, and is soon transformed into a friendly, harmless, and contributing member of society once again. The rest of the chained gang has taken her lesson to heart. Joy tries to be nicer, Darnell tries to be meaner, Randy tries to be less dumber, Earl sticks his Karma list in a drawer, Patty tries to be a good daughter.

Grizelda came back to Camden as the new and improved Grizelda, a peaceful, harmless mother instead of a crazy witch lady. Everybody was most impressed and eager to have her join them in celebration of her being a new woman. Earl tries to cross off #186 but finds his shirt pocket empty, having already put his list in a drawer. he says, "I'll do it later" as he and his brother Randy joins up with their pals and their new friend Grizelda.