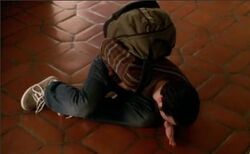 Earl punched a student after he corrected Earl on a grammatical error he made before talking to Alex Meyers, whose laptop Earl stole several years before (#37).

So far, Earl has not been seen making up for this item.