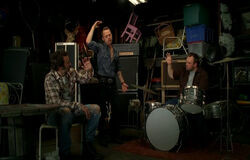 Kicked the lead singer out of my band[]

One day as Earl, Randy, and Ralph were ordering food at a drive-in, they realized they should start their own band to score women. The person listening in on the intercom was Tom Sparks, an elderly man who wanted to be lead singer. After a few practices, the band Phish Tahko booked a gig at the Crab Shack. They realized Tom was scaring away the chicks who would have slept with Ralph, Earl and Randy, so they voted Tom out of the band and performed without him. They partied with the girls for the rest of the night and broke up the band immediately afterward.

In order for Earl to cross Tom off his list, Tom wanted to perform a gig as Phish Tahko. They got the band back together and performed one last time, giving Tom the memory of performing in a rock concert.