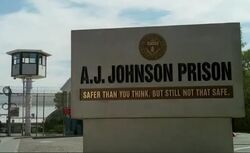 A.J. Johnson Prison was a prison in Camden County.

Earl was incarcerated in the prison after pretending to commit a crime that was actually done by Joy.

Earl spent several months behind bars, but attempted to reduce his time inside by performing helpful acts for the Warden.

Randy got a job as a prison guard by getting a score of 55% on his guard quiz (The Gangs of Camden County).

Retrieved from "https://mynameisearl.fandom.com/wiki/A.J._Johnson_Prison?oldid=8677"
Community content is available under CC-BY-SA unless otherwise noted.