My Name Is Earl Wiki
Register
Don't have an account?
Sign In
Advertisement
in: Characters, Season 4 characters, Living characters, Antagonists 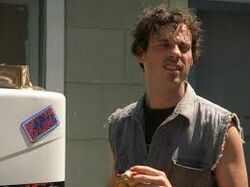 Bed Bug was a car jacker who stole cars with his friend Clyde. When Earl was a thief they were known as Clyde and his friend from out of town.

When Earl decides to cross 213 (Never let Randy have anything better than me) off his list he buys him a new car but it was stolen by Clyde and Bed Bug. When Earl tries to get it back he discovers he no longer has the protection of the law of the underworld. Earl in the end reports Clyde and Bed Bug to the police getting the car back but being stamped as a snitch in the process, but eventually Earl gets them all the admit about the times they were snitches, getting himself out of their bad books.