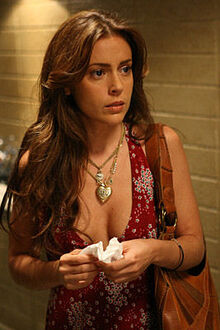 Billie Cunningham was a former criminal who got married to Earl.

Frank and Billie had been dating for quite a long time before he was sent to prison. She visited him regularly whilst he was inside ("Frank's Girl").

Earl met Billie when she came to visit Frank. She was angered to learn that Frank showed Earl a picture of her naked and ended their relationship. However, he convinced her to come back when he posted a picture of himself naked on a message board. She agreed to quit her nursing course to come back to Frank, so Earl told Frank that he should let her go, and he agreed to do so ("Frank's Girl"). Billie was then caught cheating in nursing school, and was then kicked out. She then stayed at her cousin, Jocelyn's for while, but then stole her money, gasoline, and then robbed a liqour on Christmas Day.

Earl later met up with Billie on Christmas Day after he left prison and she accidentally ran him down after robbing a liqour store.("Bad Earl") Billie then is hit by Stuart Daniels' car, and is passed out. After waking up, Stuart had feelings for Billie and told her she had killed Earl in the car accident, and the cops were after her. Eventually they ended up at Kenny James' house, where Earl, Frank, Stuart, and Catalina express their feelings for her, but Earl explains that Karma wanted them to be good together. Earl and Billie quickly but happily got married ("Love Octagon") and they were taking their wedding pictures with their eyes closed as it was match made in heaven. Earl and Billie had a strained relationship from the start, with Billie not being like Earl expected her to be from his comatose dream of her ("Girl Earl").

Earl started to avoid Billie, seeing as the best way of making his marriage work. However, after he crossed Didi off his List she became nicer that she gave Earl the same, sweet uplifting kiss with her one leg stand up as shown in his TV sitcom-world within his comatose mind. And Earl thought that if he crossed other women off his List his and Billie's relationship would improve ("Camdenites (Part 1)"). He tried to cross off #204 "Seduced seven virgins", however he was unsuccessful and Billie made him choose between her and the List. When he chose the List, she stole it and began to reverse the good things Earl had done. Earl chased her to the Camdenites's village, where she could not be caught by the police because the Camdenite Village is legally a sovereign land in which the police has

no jurisdiction. Also for the fact that the Camden police tried to keep it under wraps, otherwise all the other criminals would take advantage of that information and hide out there. She learned from the Camdenites a better way of life and decided to forgive Earl. She gave him his list back, as well as a check for $72,000 to help towards crossing more items off his list. Then Billie kissed Earl one last time with all her love in her heart after she said her last words to him: "Maybe Karma didn't want me to be your reward. But it still wanted you to have one.".

While Earl was in a TV sitcom-styled coma, he dreamed about Billie throughout. He dreamed about living with Billie, having a baby and growing old with her, and also she even gave Earl the sweet uplifting kiss with her one leg stands up, and just as the dream came to an end he finally woke up.

Retrieved from "https://mynameisearl.fandom.com/wiki/Billie_Cunningham?oldid=13860"
Community content is available under CC-BY-SA unless otherwise noted.