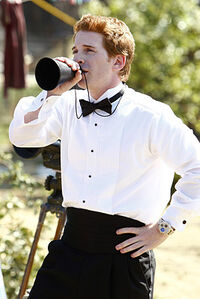 Buddy Zaks was a man whose dream was ruined as a child by Earl.

Buddy had been diagonsed with a terminal illness, and so the"Make a Wish" foundation secured him a place on a horse on the New Year's Day Parade through Camden County in 1999. A drunken Earl stole the horse, ruining Buddy's dreams. However, Buddy discovered that the doctors in Camden had been wrong, and he did not die.

During his long periods of illness in his room, Buddy became a great film buff, and developed a storyline of his own for a film involving the President, and giant squids ("The Magic Hour").

Earl made up for his misdoings to Buddy by assisting him in creating the film he wrote. Joy, Randy and Patty the Daytime Hooker were all cast, and the film was made with Buddy starring in and directing it. However, the stars became irrated by Buddy's intense directing style, and all quit. Buddy managed to get enough shots of the film made before production ended, and edited it together and arranged a premiere.

Buddy's illness got the better of him before the premiere, and he died just before the film was shown. Earl decided not to tell anyone this and let the premiere go ahead. The cast and crew were overjoyed with the film and Buddy's enthusiasm inspired others to take a closer look at passions that they wanted to explore further.

Retrieved from "https://mynameisearl.fandom.com/wiki/Buddy_Zaks?oldid=13257"
Community content is available under CC-BY-SA unless otherwise noted.