My Name Is Earl Wiki
Register
Don't have an account?
Sign In
Advertisement
in: Characters, Main characters, Season 1 characters,
and 5 more 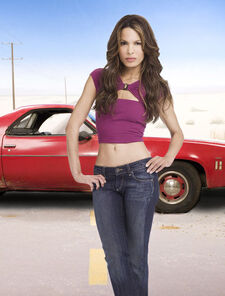 Catalina Rana Aruca is a Mexican immigrant from La Paz ("Earl and Joy's Anniversary") who works as a maid in the Motel that Earl and Randy live in, and is a stripper at Club Chubby. She has several siblings, including some she didn't even know if they are alive or not. She is the green card wife of Randy Hickey. She is afraid of snakes and rape.

Catalina was born in a small town of Guadalatucky ("Inside Probe (Part 1)") and raised in La Paz. She said that she worked on a farm as a child, but was blindfolded on the way there. She also said that she was not allowed to drink from the local well because of the bodies ("Barn Burner"). Her mom died, but she told Randy "It's okay because it was either her or me" ("Dad's Car"). She was nicknamed "Chupa Chups" by the children in her village, refering to her large head and small body which resembled a lollypop ("Sticks & Stones"). She never had any male friends prior to ariving in America, as her mother taught her that men were only interested in raping other people's mothers ("Bad Earl") .

She claims to have once killed someone ("Mailbox"), and her brother killed her father saying "men don't like it when other men sleep with their moms" when she was helping Earl cross off slept with Ralph's mom from his List ("Van Hickey"). She likes the sound of bubble wrap as it reminds her of the shooting she heard as a child ("Born a Gamblin' Man").

When Paco tells her to come to America,("The Frank Factor") she manages to escape to the US between December 1999 and January 2000. She was placed in a crate and given some bananas to eat and a newspaper, not intended for reading. When she arrived at the border, she was shot at by snipers, but not hit as many of her fellow immigrants were. As she crossed the border, she hid in the front of a car of a man with appropriate travel documents. She arrived in Camden County on January 1 2000 ("Y2K").

Before Earl and Randy[]

Catalina started work at the Motel two years before Earl and Randy moved in. She also worked at Club Chubby as a dancer. She lost her virginity in a phone booth, which was a "foursome" that included Darnell, Patty and Kenny. They all agreed to keep it quiet. ("Earl and Joy's Anniversary")

Catalina once tried to kiss Earl, but he said they could not as Randy had called "dibs" on her ("The Pilot).

She greatly wanted to attend Joy's Wedding so that she could dance, and Randy, enraptured by her preview, decided to let her go as his guest instead of Earl, who had not been invited ("Joy's Wedding").

Earl decided that he would win Joy a car to make up for his past mistakes, and entered ("Randy's Touchdown").

A competition with Randy and Catalina to keep their hand on a car as long as possible, and whoever was the last to be touching the car would win it. Randy and Catalina ended up as the last two on the car, but Catalina said she did not want to win it for Joy, she wanted to keep it herself. Randy was upset, as he wanted to help Earl with the List. Catalina ended up winning, but when the DJ asked for her Social Security number, she realized she might be caught as illegal immigrant and fled. Randy won by default and gave the car to Earl ("White Lie Christmas").

Catalina helped Earl to build a pen for some ostriches at the Right Choice Ranch ("Barn Burner").

She helped Earl to infiltrate the Winky Dinky headquarters after one of their employees paid Ralph to burn down Pops' hot dog stand ("Stole P's HD Cart"). Earl tried to make Catalina make out with Philo who was depressed, but he was not willing as he was in love with Joy ("Something to Live For").

Catalina chose some items to keep for herself after a motel resident died, taking some of the other possessions for Earl and Randy ("The Professor").

Earl asked Catalina to return to Club Chubby, a strip club that she used to work at, so that he would pay Joy's $1 million bail money. He eventually talked into coming back to work, but when she discovered that it was to help Joy get out of prison, she refused. Joy tried to do the dance for Chubby herself, but was unsuccessful and Chubby went back on his deal, refusing to pay Joy's bail. Earl collapsed from the stress of the situation, and so Catalina decided to go ahead with the dancing, not to help get Joy out of prison, but to help Earl recover ("Jump for Joy").

Catalina helped Earl search through the phone book for Maggie Lester, a girl he teased whilst at school ("Sticks & Stones").

Feeling unhappy with her life, she wanted to cross an item off the List with Earl. She decided to help with #75, and ensured the safe reunion of Will and Wendy ("Mailbox").

She sent money home every week so that the men who go to her village can be paid off, and so they do not cut off her brother's finger. She went with Earl to bet on chickens, but had to leave due to her shift at Club Chubby. Earl caused her to be late, and whilst speeding she was pulled over by the police who realized that she was an illegal immigrant, and deported her ("Born a Gamblin' Man").

While Catalina is back in her village, she is still cleaning at a motel while interacting with two guys that resemble Earl and Randy. When Earl arrives, Catalina is happy that he is going to marry her. However, Earl purposely fails the village's tests, after which Randy steps in and passes the tests, to marry Catalina.("South of the Border, Part Uno"), ("South of the Border, Part Dos")

Randy and Catalina get an apartment, but when Randy tells her that he loves her, Catalina freaks out and tells Earl she doesn't think of Randy that way. On the advice of Joy, Catalina has sex with Randy but made herself unattractive by adding hair to her lips and armpits and rubbing fish, cheese, and onions over her arms and legs. What Catalina hadn't expected was enjoying the sex, which she did. She begged Randy to stay but Randy just couldn't deal with the fact that Catalina pretended to be his mother. So their marriage remains a "green card marriage". ("Foreign Exchange Student").

Catalina helped Earl to break out of prison ("Early Release").

Also, she thought she was a lesbian until she reconnected with her lost love Paco. ("Love Octagon").

Catalina played the role of a ruthless terrorist in Buddy's film, "2 the Max". Her scene involved her throwing a knife in Buddy's (who was playing the title role of Max) direction, which he successfully avoided. She was one of the few actors not to quit the film, but her role was over when others became irritated by Buddy's intense directing style. She attended the premiere at the Crab Shack ("The Magic Hour").

She kicked Cappy out of his Motel room next to Earl and Randy because Earl was annoyed by his stories. Lloyd moved in, who Earl became unsettled by, but Catalina refused to move him, due to his threats. ("Sold a Guy a Lemon Car").

Also she and Joy have always been at odds with each other, there is an episode where Joy pins her with a riding lawn mower in a shed, and she was going to threaten to call the cops. But when Darnell tells them he would have to kill her, she pleads for her life only to be saved by Joy knocking Darnell out.("Gospel")