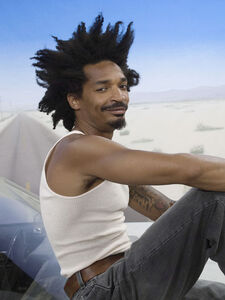 Darnell Turner is the alias given to Harry Monroe, a former government assassin who was in the Witness Protection Program. He is Joy's current husband.

Darnell works at the Crab Shack. He keeps a tortoise called Mr. Turtle. He graduated from college at age 14. He also is a virtuoso cellist and can identify 254 types of cheese by taste alone ("Buried Treasure"). He can speak English, French, Russian, Hebrew, Arabic and two other languages. He has black belts in three Martial Arts that end in "Do"("My Name is Alias"). He is shown to be very intelligent and calm. He lives in Pimmit Hills Trailer Park.

After being called back to work for the government one last time in a mission with his father, Darnell was able to stop hiding and could embrace his former name of Harry Monroe, although he decided to allow his family and friends to still know him as Darnell ("My Name is Alias") ("Chaz Dalton's Space Academy").

He was shocked to discover, after a DNA test by Earl, that he was not the paternal father of Earl Jr. as he had always thought ("Dodge's Dad").

His real name is Harry Monroe ("Mailbox"). He was a former assassin for a mysterious government organization, where he was trained by his father, Thomas Monroe. ("My Name is Alias") He graduated from college at age 14, and is a Rhodes scholar ("Dodge's Dad").

After a mission where he was asked to kill the nine-year-old ruler of a socialist nation, he leaves the organization and testifies against it. ("My Name is Alias"). Afterwards, he is placed in the Witness Protection Program, where he was dropped off in Camden County by two agents who informed him he was now to be known as "Darnell Turner". They handed him a folder with information he had to learn about his life, and left him ("Y2K").

Darnell is a calm, friendly and forgiving man, something which often seems to be overlooked by many. He is only shown to lose his anger once in the episode "Joy's Wedding" where Joy told him Earl slept with his mother. Upon hearing this, Darnell is enraged and proceeds to beat up Earl until the latter admitted to sleeping with Joy, rather than Darnell's mother. He is incredibly intelligent, but does not show it very often. He has been known to display extensive knowledge about the US Judicial System, zoology, the Electoral College, and politics; not understanding anything he says, Darnell's friends ignore him, assuming he is just talking about "black people stuff."

Darnell works as a cook at the Crab Shack. Darnell received the nickname "Crabman" after Earl forgot his actual name. Ever since, Earl and Darnell's relationship has consisted mostly of:

Retrieved from "https://mynameisearl.fandom.com/wiki/Darnell_Turner?oldid=13656"
Community content is available under CC-BY-SA unless otherwise noted.