My Name Is Earl Wiki
Register
Don't have an account?
Sign In
Advertisement
in: Supporting characters, Characters, Season 1 characters,
and 4 more 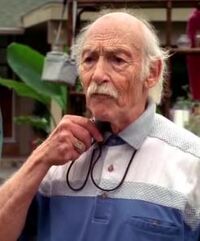 Electrolarynx Guy is an old man that lives in Camden County. He can speak only with the use of his electrolarynx, after smoking all of his life.

The Electrolarynx Guy was first seen selling stuff in a yard sale, Randy brought a tape about how to quit smoking off of him to give to Earl. ("Quit Smoking")

He helped Earl with Number 58 on The List by acting as Randy's father to help him get into high school in order to score a touchdown. ("Randy's Touchdown")

When Earl was trying to help his dad win the election for mayor, Electrolarynx Guy was one of people he manged to persuade to vote for Carl. ("Cost Dad the Election")

When Earl took Maggie Lester and her carnival friends into the Crab Shack, the Electrolarynx Guy thought they were a bunch of freaks. ("Sticks & Stones")

When Joy found out about Darnell being in the Witness Protection Programme and his real name was Harry Monroe she kicked him out of the trailer for not telling him who he was. Darnell got the Electrolarynx Guy and two other guys to sing a song with him to get Joy take him back but she just slamed the door in his face. ("Mailbox")

The Electrolarynx Guy was seen on the "Cops" episode that was filmed in Camden County having a fight with Nescobar as he tricked him into eating pork which was against Nescobar's religion. When Officer Stuart Daniels arrived to see what the problem was Nescobar took Electrolarynx Guy's electrolarynx and ran off. Electrolarynx Guy tried signaling with his hands to get Stuart to stop Nescobar but Stuart could't understand him. ("Our 'Cops' Is On!")

The Electrolarynx Guy was at Earl's birthday party telling everyone that Earl once threw a penny down his hole before the wrote his list. ("The Birthday Party")

Electrolarynx Guy was seen on the second episode of "Cops" filmed in Camden at the Fourth of July fair in the dunk tank wearing a Osama bin Laden mask as a new addition. Officer Daniels said to the camera that he hoped the real Osama was watching and tried hitting the target but kept missing it, then Earl came along and pushed the target just so Electrolarynx Guy would fall in. ("Our Other 'Cops' Is On! (Part 1)")

Electrolarynx Guy was one of the Camden residents that helped get Joy and Darnell's trailer back up right after Earl knocked it over, but got his foot trapped under the trailer after getting it back up. ("Camdenites (Part 1)")