My Name Is Earl Wiki
Register
Don't have an account?
Sign In
Advertisement
in: Cast, Main cast, Season 1 cast,
and 2 more 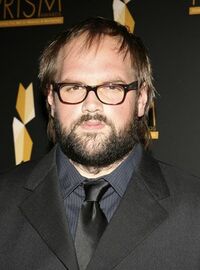 Ethan Suplee plays the role of Randy Hickey on My Name is Earl.

Born in New York and raised in Los Angeles, Suplee landed his first role at the age of sixteen on the popular television series, "Boy Meets World." He recurred as the reluctant bully 'Frankie' for three seasons. Most recently for television, Suplee made a powerful guest-starring appearance on NBC's "Third Watch," where he played a disturbed young man who filmed a video journal about his obsession with a girl.

He made his feature film debut in 1995 (alongside "Earl" co-star Jason Lee) in writer/director Kevin Smith's "Mallrats," where he played the memorable 'Willam Black,' a young man determined to crack the mystery behind the mall's magic eye poster. Smith went on to cast Suplee in "Chasing Amy" and as the voice of 'Norman the Golgothan' in "Dogma." More recent comedy credits include "Without A Paddle" with Matthew Lillard and Seth Green, director Todd Phillip's "Roadtrip" and "Evolution," for director Ivan Reitman.

Suplee showcased his impressive acting chops with a powerful and compelling performance in 1998 in director Tony Kaye's "American History X." He played a carelessly violent racist skinhead who tries to convince his friend (Edward Norton) to "come back to his roots" in their gang of white supremacists.

His role of high school football lineman 'Lewis' in Disney's "Remember the Titans" exposed Suplee to a larger audience, and he was singled out by many critics as a fresh and welcome screen presence, with the Hollywood Reporter calling his performance "scene-stealing."

For the big screen, Suplee will next be seen starring in "Art School Confidential," for director Terry Zwigoff ("Ghost World"), and he recently completed work for director Darren Aronofsky on Warner Bros.' "The Fountain," with Hugh Jackman and Rachel Weisz.

My Name is Earl[]

Suplee co-stars opposite Jason Lee in NBC and 20th Century Fox TV's half-hour comedy, "My Name is Earl." He plays 'Randy,' the brother of Lee's 'Earl'.

Although Lee and Suplee had worked together before, Garcia didn't discover Suplee because of that. Garcia discovered him while watching the DVD version of Without a Paddle, looking at the film because another actor in it had been recommended to him. What convinced Garcia to bring Suplee in for an audition were comments about him he heard on the DVD's commentary track. One of the actors in the commentary told the story of a dispute between the film's director and Suplee. The scene the actor described was one where Suplee's character was supposed to be pointing a gun at some people Suplee and others had captured. The commentary noted that Suplee had insisted that he shouldn't point his gun at them after all, since in Suplee's mind, it had taken so long to capture the people that it had given the character time to rethink his motives. Suplee got his way in the scene, over the director's objections. The fact that Suplee would think so much about such a small detail was enough to get Suplee an audition. Garcia and the show's writers have subsequently used Suplee's attention to detail to the show's advantage, in various "pestered by a bee" background activities that Suplee's character does in various scenes. The first such scene was an improvisation in the pilot, where Suplee is looking up at the ceiling with his mouth open.

Suplee married Brandy Lewis, daughter of Geoffrey Lewis and sister of Juliette Lewis, in the summer of 2006. The couple have two daughters, Frances Clementine (born 2005) and Billie Grace (born 2007). Lewis also has two daughters from a previous marriage. Both Suplee and Lewis are members of the Church of Scientology.[

Suplee made a bet with Kevin Smith (director of films such as Mallrats which Suplee starred in) that he'd lose more weight than him in 10 years (from right after making Mallrats). Suplee won.

His father is Bill Suplee, who has had multiple guest appearances in "My Name Is Earl" as Willie the One-Eyed Mailman.