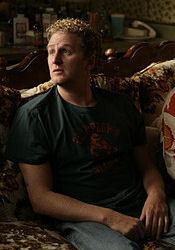 Frank Stump was a former friend of Earl before he was sent to prison, where the two reconnected.

He helped Earl and Randy by sub-letting his kitchen. He was formerly an employee at the Crab Shack until Darnell took his place. Was arrested when he crashed into a van driven by Witness Protection (Who were dropping off Darnell) on the way back from a casino robbery while holding Howie Mandel hostage. He is currently spending 20 years in prison. His trailer is currently occupied by Joy and Darnell, and his El Camino is currently being used by Earl.("The Frank Factor").

Frank got thrown in to the hot box on the day was supposed to see his girlfriend Billie and showed a picture of her naked to Earl, When Billie found out Earl had seen her naked picture she broke up with Frank. Frank was heartbroken and given up hope so Earl tried to set Frank up with another girl but he tried to make her look more like Billie, so Earl helped Frank get Billie back by posting a picture of him naked on a message board saying he was sorry. When Earl found out Billie quit her nursing course to see Frank he convinced Frank to give her up, Frank did so and felt like a decent guy for doing so. ("Frank's Girl")

Earl choose Frank for the "Scared Straight" school program and got taken there by Randy, on the way back Frank fell asleep and Randy stops to get ice cream. Huge Scooby and Scary Bob go out to collect the ice cream and Randy stays in the van so he didn't get a ticket, when Frank wakes up he tells Randy that he had given Huge Scooby and Scary Bob the chance to escape so Randy goes to stop them but discovers they didn't but Frank had. The Warden told Earl and Randy to find Frank. ("Randy in Charge")

Thanks to Paco Earl found out that Frank went back to the trailer to retrieve the money he hid there, when he and Randy find Frank he finds his gun he also hid in the trailer and held them hostage. Joy and Darnell return to find Earl and Randy chained to the freezer, Frank makes Joy move the stove to retrieve the money when Joy's water breaks and starts to give birth to Liberty and Ray-Ray's baby. After Joy gave birth Frank ran off only to be taken down by a K-9 tracker Randy lost. ("Midnight Bun")

When the Warden destroyed Earl's certificates to get him out of prison early, Earl, Frank and Paco make a plan to escape by using going through the ventilation system to the loading dock. As they were carrying out the plan Earl fell through the roof into the Warden's office but Frank and Paco carried on their escape and abandoned him, Darnell who knew about the escape goes to help Earl giving Frank and Paco the adventage to take Joy's nun outfit, hijack the van and drive away. But they crash into a police car and get thrown into prison again just as Earl gets let out. ("Early Release")

Because of prison overcrowding Frank and Paco got moved to a halfway house but were allowed outside for eight hours a day if they had a job, Earl goes to see Frank to ask him for assistant to find Billie, Frank agreed only if Earl help get him a job to get him outside everyday. Earl got Frank a job at the Crab Shack and went to look for Billie, with the help of Jocelyn and Kenny they found her, but when they did Frank wanted Billie back again and wanted to talk to her first. Earl told Frank he wanted to prepare what he want to say first but really wanted really wanted to get rid of Frank so tells Darnell to fire him, but that didn't stop Frank and escapes the house to fight Earl. Frank then asks Billie to take him back but she had chosen to spend her life with Earl, after that Frank started seeing Jocelyn. ("Love Octagon")

Retrieved from "https://mynameisearl.fandom.com/wiki/Frank_Stump?oldid=13854"
Community content is available under CC-BY-SA unless otherwise noted.