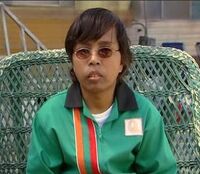 Iqball is most likely from the Bengal region of India, or at least his family may hail from there. He is the operator and possible owner of the convenience store in which Earl obtained his lottery ticket for $100,000 USD. ==Season 1==he was in pilot toward the end at the gay bar Earl was trying to return $10 he stole from Paul but didn't know who he was at the time as he didn't see his face, luckily Iqball still kept security tapes on the day it happened. Iqball didn't speak English at the time so Patty had to translate everything he said to Earl. As they were looking at the tapes Iqball saw footage of Patty giving him horse rides around the store and told Earl to fast forward that part, Patty told him he had nothing to be ashamed about. Earl soon recognized Paul on the footage and so did Patty as they were in the same book club. Iqball said that Paul tried to buy a scatch card but had no money so Earl got the scratch card that won him $100,000 ("Number One").

Iqball was seen on the second episode of “Cops” filmed in Camden County, Earl and Randy tried to sell him a stolen lamb for $20 but were caught be Officer Stuart Daniels and ran off. Stuart pulled out his gun to stop them with his gun but accidentally shot the lamb, Iqball asked if he could have it and Stuart told him to take it fast ("Our Other 'Cops' Is On! (Part 1)").

When Earl, Randy and Joy found a bag full of pot that Dwayne that had accidentally left in the back of Earl’s car they decided to try and sell it. Joy used the pot to try and pay for goods in Iqballs store but did not succeed ("No Heads and a Duffel Bag").

Iqball helped to tip Joy and Darnell's trailer back onto its proper side after Earl had knocked it over during a drunken evening ("Camdenites (Part 1)").

Iqball played a role in Buddy’s movie “2 the Max”. He was also supposed to be safety for Buddy’s flamethrower but when it when off accidentally Iqball dropped the bucket and ran ("The Magic Hour").

Iqball went to the auditions for Estrada or Nada to challenge Eric Estrada at fancy talking and got though("Darnell Outed (Part 1)").

Iqball was seen on the Inside Probe episode revealing how Ernie Belcher was killed. When Iqball heard the story that Earl and Randy had killed Ernie he told the film crew he was freaking out. A camera found in the womens bathroom in the Crab Shack showed Iqball coming out of a stall with Patty and three other guys ("Inside Probe (Part 2)").

In the flashback of Joy recalling a Halloween party at the Crab Shack the night she got pregnant with Dodge Iqball came up to her dressed as Catwoman as he was unclear which costumes were for men and which were for woman and walked away ("Dodge's Dad").

Iqball was unable to speak English in Season 1 yet most of his appearances afterwards were flashbacks of Earl in his criminal days where he is seen speaking fairly coherent English.

Retrieved from "https://mynameisearl.fandom.com/wiki/Iqball?oldid=13237"
Community content is available under CC-BY-SA unless otherwise noted.