My Name Is Earl Wiki
Register
Don't have an account?
Sign In
Advertisement
in: Cast, Main cast, Season 1 cast,
and 3 more 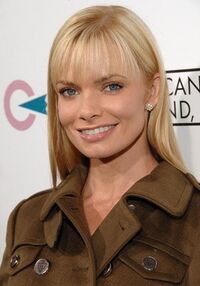 Jaime Pressly plays the role of Joy Turner on My Name is Earl.

After growing up in North Carolina, Jaime spent almost 11 years training in gymnastics and eventually entered the modeling world. Jaime can be seen on the cover of an older Teen Magazine, and has modeled throughout the United States, Italy, and Japan.

One persistent rumor is that Pressly married a man named Brodie Mitchell in 1998. Pressly, who has never married, has stated she has heard of Mitchell but does not know him. Pressly dated her Jack and Jill co-star Simon Rex in 2000 and 2001. In a December 10, 2001 radio interview with Howard Stern, she said that Rex broke up with her on her birthday.

In October 2006, she became engaged to her boyfriend of a year-and-a-half, DJ Eric Calvo (aka DJ Eric Cubiche), with whom she had been friends for nine years. Pressly gave birth on May 11, 2007 at 7:31 a.m. in Cedars-Sinai Medical Center to their first child, Dezi James Calvo, who weighed 6 lb 4 oz (2.8 kg). In a February 2007 interview on The Tonight Show With Jay Leno, Pressly said she wants the child to be bilingual (English/Spanish) to reflect Calvo's Cuban heritage.

Pressly said in a 2006 interview with Esquire magazine that she almost purchased a ticket for a flight on one of the planes that crashed into the World Trade Center on September 11, 2001, but decided not to take the flight because she felt it left too early in the morning.

Community content is available under CC-BY-SA unless otherwise noted.