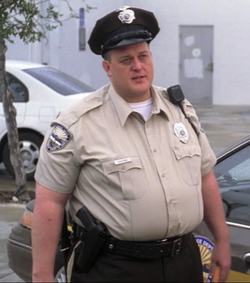 Jeff was first seen on the second episode of “Cops” filmed in Camden County, he was sent to Pimmit Hills Trailer Park where he saw Joy attacking Earl with a weed whacker. Jeff talked to both of them to see what was going on and then walked away to let them settle the argument themselves but Joy still attacked Earl when he left. Jeff then got a call from Darnell because his grandmother had locked Joy in her bathroom, when Jeff tried reasoning with Darnell’s grandmother he got burned in the head with a curling iron and she ran off. At Stuart’s demonstration of the polices new terrorist equipment he fired t-shirts at the audience but had the cannon set at stadium and injured an old man. Later he and Stuart found out someone stole some of their equipment and fireworks and panicked ("Our Other 'Cops' Is On! (Part 1)").

When Stuart called for backup at the trailer park when he found Earl and Randy stole the equipment Jeff rushed over, when he saw Skih he thought he was terrorist and tackled him. Stuart and Jeff took Earl and Joy to the fair and stuck a camera inside Earl who said he was a terrorist just to get it out of him. While Stuart was calling his mom, Randy stole the police car Earl and Joy were in so Stuart and Jeff chased after them. Stuart and Jeff caught Earl, Joy and Randy to arrest them, then Tim Stack drove past the fireworks they stole and the sparks from the bumper car he was driving set the fireworks off, they all watched the fireworks until Earl, Joy and Randy were put in the police car ("Our Other 'Cops' Is On! (Part 2)").

When Stuart accidentally ran over Billie after she got out of her car to see if Earl was alright after she ran him over he called Jeff and an ambulance but said that he found them both lying in the street. The paramedics chose to rescue Billie first but Randy saw Earl, and then took him and the ambulance. Jeff alerted the other officers about the stolen ambulance and said he would peruse Randy but the mayor thought it would be a good idea to replace his car with a bicycle. Stuart told Jeff that he hit Billie with his car, Jeff already knew and told him he would get through it. While Billie was being walked to the hospital Jeff helped get rid of the dent on Stuart’s car when he hit Billie. Jeff told Stuart he learn that trick from his twin brother, then Randy drove past in the stolen ambulance and Jeff complained about no one chasing the ambulance ("I Won't Die with a Little Help from My Friends (Part 1)").

When Billie started undoing the items on Earl’s list she tipped over Joy and Darnell’s trailer after Earl had got some of his friends to help it back up right again. Joy knew that Billie had called Earl to meet her outside the Camdenite village with Jeff to arrest her for tipping over her trailer. Billie walked on to the bridge towards the village and thinking Earl was the one who called Jeff told him he was the first person she was going to put on a list of people to kill. Joy told Jeff she knew he could arrest Billie for a death threat but Jeff told her he couldn’t do anything as Billie was on Camdenite property which the Camden police has no jurisdiction over. Billie took advantage of the rule and told Earl when she least expected it she would come for him then ran off, Jeff told Earl not to worry and he would stay outside the bridge for five days for her before he went off to the police’s fishing tip ("Camdenites (Part 2)").

Earl brought Randy a car for his birthday but when Clyde and Bed Bug stole it twice he went to tell Jeff what they had done and asked him to keep it between them. But Jeff bragged to another officer about finding out what Clyde and Bed Bug did thanks to Earl which a criminal overheard and sent a text to all the other criminals in Camden County. Clyde and Bed Bug went and wrote snitch over Earl’s apartment, when Earl found they found out they talked to the cops he brought Jeff over to their house to get Randy’s car but both of them denied knowing anything about the car. Jeff didn't do anything else on the matter because he thought Clyde and Bed Bug were crafty, but Earl told him they were idiots who were happen to knew they were coming ahead of time because Jeff was a horrible police officer. Jeff’s feelings were hurt and and he stayed outside the house to catch Earl trying to steal Clyde’s dog and took him back to the police station. He told Earl he would let him go if he gave information on someone else, Earl snitched on Creepy Rodney who snitched on Joy who snitched on Jasper who snitched on Clyde and Bed Bug and started a chain of criminals snitching on each other and in the end Earl manage to get Randy’ car back ("Quit Your Snitchin'")

Jeff was seen on the Inside Probe episode revealing how Ernie Belcher was killed. While being interviewed Stuart noticed he was wearing make-up, Jeff didn't admit it until Stuart proved it then Jeff complained the reason he was wearing make-up was because he looked like he hadn't slept for weeks on “Cops”. Stuart and Jeff brought in Earl and Randy as they believed they were responsible for Ernie’s death when they found letters threatening letter by Randy in Ernie’s office until race car driver Michael Waltrip who was in Camden County to visit Ernie revealed that they were with him on the night of Erine’s disappearance with proof of pictures ("Inside Probe (Part 1)").

Joy told Earl that Little Chubby was Dodge’s dad so Earl tried to question him but Little Chubby threatened to kill Earl if he didn't leave it alone. Earl who thought Dodge deserved to know who his father was went to look in the dumpster outside Club Chubby for a sample of DNA but almost got shot by Little Chubby. Earl told Jeff that Little Chubby tried to kill him but Jeff told him he couldn't help because Little Chubby brought off the Chief of police and if anyone accused Little Chubby of a crime they would have to be arrested so pinned Earl to his car. Earl asked Jeff if he could just give him a ticket for a broken light, Jeff agreed since they were friends and smashed one of Earl’s car lights ("Dodge's Dad").

Retrieved from "https://mynameisearl.fandom.com/wiki/Jeff_Hoyne?oldid=12914"
Community content is available under CC-BY-SA unless otherwise noted.