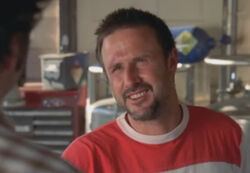 Sweet Johnny was a stuntman in Camden County. Earl had an affair with his girlfriend, leading Johnny to be #7 on the List.

Sweet Johnny performed many crazy stunts, and despite his many injuries continued to do so for a long time. Sheila supported him through all this, but one day she was charmed by Earl and they began an affair, which carried on for a long time when Earl kept convincing Johnny to do crazy stunts. However, Earl began to feel bad and ended the affair and left Sheila with Johnny, who all the while was left unaware that the affair ever occurred.

A short time later, Johnny fell over and banged his head, causing him to lose his memory and think the same day was repeating over and over. Sheila looked after him for several years but went back to her job as a parking officer soon after ("Sweet Johnny").

Earl went to see Johnny to apologize for sleeping with Sheila. Johnny was angered and chased Earl away. The next day Earl went back and Johnny appeared to have forgotten their last conversation. Earl went to see Sheila to ask her what was wrong with Johnny, and she explained about the accident. Earl said that Johnny deserved to know he was in an accident, and told him about the memory loss. Johnny was horrified, and tried to commit suicide in a final stunt.

Earl managed to stop him, with the help of Joy, and Johnny went back to his routine of repeating the same day over and over again. To make up for the List item, which Earl decided to leave on permanently, he decided to often go back and visit Johnny, making sure he was alright and still happy ("Sweet Johnny").

Retrieved from "https://mynameisearl.fandom.com/wiki/Johnny?oldid=11305"
Community content is available under CC-BY-SA unless otherwise noted.