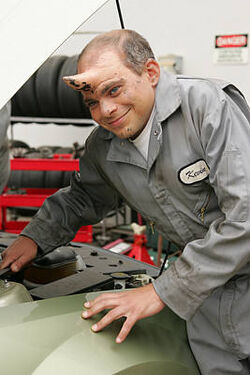 Kevin is a resident of the local neighborhood Shady Grove.

After Earl apologized to Maggie Lester for bullying her he decided to get to know the other residents of Shady Grove. Kevin was good at fixing cars and had restored more than twenty all on his own. Like the other residents of Shady Grove he was too scared to go out in public due to his horn and the fact he didn't have a neck but after Earl helped him over come his fear he became a mechanic ("Sticks & Stones").

Kevin was seen as Evil Dr. Horn in Randy's story who had kidnapped Earl and Catalina and kept them hostage at the Crab Shack ("Creative Writing").

Kevin helped to tip Joy and Darnell's trailer back onto its proper side after Earl had knocked it over during a drunken evening. He fell over while pulling on the rope and his horn went in to Nescobar's back ("Camdenites (Part 1)").

While William and Kevin were walking by the road Billie, who was undoing all the items on Earl's List, drove by with a group of tourists in Earl's car telling them to laugh at William and Kevin saying they didn't have emotions. Kevin had to hold an angry William back, they both went to see Earl to complain about Billie as Shady Grove was full of tourists who wanted to see "Freak Town" ("Camdenites (Part 2)").

Retrieved from "https://mynameisearl.fandom.com/wiki/Kevin_the_Unicorn_Man?oldid=12528"
Community content is available under CC-BY-SA unless otherwise noted.