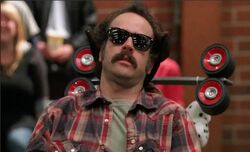 Killerball is the 18th episode of Season 3 of My Name Is Earl, and the 64th episode overall. When the hospital wants to get rid of Earl, Randy decides to take care of his brother by himself. But instead of working on the list for Earl, he uses Earl's help to cross things off in order to help him get better.

Randy goes to a wheelchair bar to find Fred and Tiffany who when skydiving when Earl and Randy where kids and Fred and Tiffany were put in a wheelchair and Earl and Randy took the wheelchairs and left them in the sun. Randy has a wheelchair that can be controlled with a remote and Freds team is down one player for Killerball, so Randy controlls Earl in the game so he can cross Fred off his list. He helps Tiffany by making her ex-boyfriend jealous by acting like Earl is her boyfriend. Tiffanys ex is mad at the lifeless Earl and throws the ball at Earl's face and Fred catches the ball and Fred's team wins, and Tiffany is back with her ex. Then it showes Earl waking up from his coma and says "I have to find Billie", the girl who hit Earl when doubting karma.

Community content is available under CC-BY-SA unless otherwise noted.