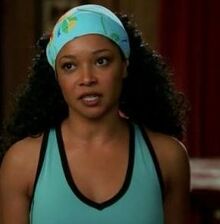 Liberty Washington is the wife of Ray-Ray, and the half-sister of her once sworn nemesis which is Earl's ex-wife Joy. And she has the baby daughter named Ann (sometimes called Ray Ray Ann by her surrogate Joy). She also happens to be a well known wrestling sensation known as Lady Liberty in the famous all-women wrestling entertainment in Camden County called B.L.O.W. (Black Ladies of Wrestling). she appeared in B.L.O.W. which is the same name as the sport she's in.

Liberty Washington and Joy Darville (now called Joy Turner, later revealed to be her half-sister) had in the past, a difficult relationship and even a nasty childhood rivalry between the both of them since kindergarten when they were little girls. They even called each other road whore plenty of times. They both still dispised each other more and more, even in high school when they were teenagers like they had in their school debate. And still the hatred between the two them goes on and grew worse until then.

Liberty later discovered the truth of their relation as a teenager, though kept it to herself and never told her mother she was aware.

Joy approaches Randy and Earl at the Crab Shack. She tells them about a meeting with her deaf lawyer. Her lawyer has just dropped a bombshell according to her lawyer's background check: It seems Joy has a half-sister, the result of her father's multiple "multi-racial" extra-marital affairs while cheating on her mom("White Lie Christmas"). Shocked, Joy tells Earl her half-sister is Liberty Washington, a sworn enemy since kindergarten.

Earl recalls Joy and Liberty's difficult past relationship, which has grown worse over the years. He remembers how he and Joy stole Liberty's credit card once, and went on a shopping spree - even paying for a homeless man's laser eye surgery. Ashamed, Earl writes up this event on his karma list: "Stole a girl's identity".

To make up for stealing her identity, Earl and Randy pay a visit to Liberty's house Liberty has known since childhood that she had a "white sheep" in her. Earl learns Liberty under the famous, yet positive and patriotic name Lady Liberty is the star of a Camden County's women wrestling team, Black Ladies of Wrestling. To make her act more controversial since she knew that wrestling needs controversy, she pays her neighbor to dress up as a female Klan member called the Klanimal. She also shares double billing with her husband Ray-Ray, who plays her badly-beaten evil manager called The Man.

Randy was so impressed that Ray-Ray was a wrestling villain. The only time he'd got play a villain was in a church play as the Roman soldier Longinus to get pick Jesus with a broomstick spear. Ray-Ray refused to continued practicing with her since he's still dizzy from a plle driver last Saturday. Liberty loved him but she told him to suck it up because she has an audition and she needs a villain. An overjoyed Randy with a hard head that one can break stuff with, now replaces Ray-Ray as Liberty's partner-in-crime as She says "Hey Ray Ray, you could can go on a long walk with your stupid lizard! I found a new white devil!".

Ray-Ray tells Liberty he wants a child, but Liberty insists she must continue to pursue her wrestling dreams. As Earl watches on, he realizes how he can help them. He wonders how he can convince the half-sisters to have a baby together. He explains the difficult surrogacy process to an excited Ray-Ray and Liberty and Joy and Darnell.("Foreign Exchange Student").

When Earl reveals the pairing to the interested parties, he is met with angry resistance. "I'd rather have a pitbull stick a litter of puppies in me than carry this woman's demon child!" says Joy. Liberty retaliates with, "That pitbull would have to be pretty drunk to knock you up!".

Earl takes his seat at the wrestling show. Lady Liberty appears alongside Randy. Unfortunately, Randy doesn't take well to the crowd's jeers and jibes and is booed off the stage. The Klanimal appears, but in a surprise twist, it's Joy. The pair fight viciously and Liberty confides to Joy how much she resented not having a dad.

Although Joy loses the violent wrestling match, she feels sorry for her deprived half-sister and they become fast friends. Liberty is offered a lucrative wrestling title and becomes a "Black Lady of Wrestling". Overjoyed, the sisters decide to make up and Joy agrees to be Liberty's surrogate.

Joy is so pregnant, that she gets stuck in the waterbed, and Darnell has to take it apart to free her. After putting aside a lifelong feud with her half sister Liberty, Joy offered to be her surrogate, and now she's beyond ready to pop. When it all began, Joy agreed to abide by Liberty and Ray-Ray's stringent rules, but now her patience is running thin. How's she going to celebrate New Years without G-strings and canned cheese?

The battle for who's in charge continues for Joy, too, as she checks herself into the hospital and demands labor inducing drugs. Darnell reminds her that she gave Liberty her word that she would have a natural childbirth rather then having her half- sister's baby coming into the world dripping with lies, but Joy points out that her word means nothing.

While Joy and Darnell are at the hospital, Catalina watches the kids. She takes them to a stinky motel room, but doesn't know what to do with them because she's not good with kids. Being out of prison feels great to Earl, but Randy refuses to remove his handcuffs. He's lined up a K-9 tracker to find Frank, but Earl already learned from Paco that Frank's probably returning to the trailer to pick up the money he stashed there. Randy refuses to let Earl drive, and the K-9 dog runs away.

Joy is ushered into a luxurious birthing suite, which also offers spa services that Joy mistakes for lunch. All expenses will be paid by Liberty and Ray-Ray. Earl and Randy stake out the trailer. Randy passes the time by pretending to have a cell phone. When Earl starts honking the horn, Randy remembers the time he was attacked by gooses, and finally breaks down, handing Earl the key to the handcuffs.

Liberty and Ray-Ray show up at the hospital to inform Joy that she'll have the baby without drugs in a birthing pool. They are shocked when a male nurse shows up with a huge syringe to induce labor. A former pro-wrestler, Liberty dives for the syringe("B.L.O.W."), which winds up sticking into Darnell's abdomen. Without her shot, Joy decides she's going home.

The kids teach Catalina how to be a kid, but not how to be a good sport. When an ice cream truck pulls up to the trailer park Earl leaves the car to get some, so Randy fires on him with the bean bag gun. When he returns to the car with a creamsicle, Randy's crying. Earl's right - Randy sucks at everything and can't be in charge. Earl points out that Randy's good at being in charge of toys, but not animals, since the K-9 ran away.

Earl spies Frank entering the trailer. Earl knows that Frank is looking for his money, but Frank insists he's looking for his gun, which he uses to take Earl and Randy hostage. When Joy and Darnell return home, they find Earl and Randy chained to the freezer door. Frank makes Joy help him move the stove to retrieve his money, and her water breaks. Liberty and Ray-Ray arrive to say that they have called the cops to retrieve their stolen property - the baby.

Frank wants to turn himself in, but Earl knows that they can't involve the cops or the Warden will get in trouble with his wife, the Governor. After Earl's pep talk, Frank points his gun at Joy's belly and sends Darnell and Ray-Ray to ditch the cops. Joy starts screaming, and Darnell asks for scissors and a chip clip to deliver a baby girl, moving everyone, including Frank. Thus the beautiful baby girl Ann was born and that Liberty and Ray-Ray were blessed to have a child. But when Ray-Ray picked up the gun and tried to kill Frank for holding him, his family and friends hostage, yet there were no bullets in it. So Frank makes runs for it, and Randy breaks off the freezer door, so that he and Earl can chase him.

The K-9 returns in the nick of time to take down Frank. Randy learns that it's okay to not be in charge, he's good at some things. Earl claims he can only be in charge with Randy on his team. Later, Joy gives Liberty Frank's money for her new daughter Joy also nicknamed Ray-Ray Ann, for college or a boob job in case she's not smart. Darnell cooks up a victory dinner for everyone at the Crab Shack including his sons & Catalina who not only playing games with each other, she also enjoyed being a surrogate parent and a kid.

Retrieved from "https://mynameisearl.fandom.com/wiki/Liberty_Washington?oldid=13770"
Community content is available under CC-BY-SA unless otherwise noted.