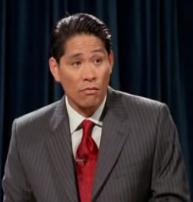 Marty Park ran for Mayor against Carl Hickey. Four years before making The List, Earl blew his father's chances of becoming mayor. Carl was angered after seeing the hopeful mayor-to-be Marty Park change a flight route over his and the neighbouring houses, so decided to run for mayor opposite Park. Meanwhile, Earl got into trouble with the police, something that was picked up by Park's campaigners, ruining Carl's chances of being elected ("Cost Dad the Election").

Earl re-entered his father for election in 2005 vs. Marty Park again. Carl was very popular amongst those who wanted the air route changed, but after a run-in with the police a second time Carl lost again. ("Cost Dad the Election"). While Joy was doing Patty's nails she tells her to stop biting on them, Patty replies "Don't tell me, tell the Mayor, he's a nibbler."("Number One")

Retrieved from "https://mynameisearl.fandom.com/wiki/Marty_Park?oldid=6722"
Community content is available under CC-BY-SA unless otherwise noted.