My Name Is Earl Wiki
Register
Don't have an account?
Sign In
Advertisement
in: Incomplete episode guides, Episodes, Season 3

This episode guide is incomplete! 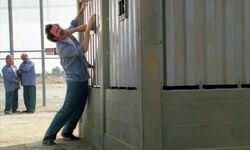 My Name Is Inmate 28301-016 (Part 2) is the 2nd episode of Season 3 of My Name Is Earl, and the 49th episode overall. Earl begins his prison sentence while Joy tries to repay Earl by taking care of Randy, who is struggling to adjust.

Joy is quickly realizing how dependent Randy is on Earl, and she is starting to lose her patience. To help Randy a bit, Catalina created a sock puppet named “little earl.” Joy and Darnell are woken up by Randy's incessant questioning and Joy is about to lose it, but she finds away to keep him quiet.

To make up the past to Glen Shipley, Earl made him a weapon however; Glen used it to stab Earl. Earl finds out that Glen messes up his chances at parole every time and he wants to know why, but Glen doesn't make it easy for Earl to help. Earl helps Glen collect his Scout badges and enlists the assistance of the other inmates.

Earl realized that by helping people inside, just as he did on the outside was how he would survive in prison. Randy leaves Earl's shirt behind and starts making decisions for himself; He steals a car thinking it will allow him to move in with Earl, at the prison.