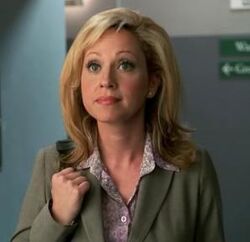 Nicole Moses was a reporter who became #29 on Earl's list.

Randy and Earl clowned around behind Nicole as she covered a meth lab explosion. The brothers gained notoriety with this "crazy arms" dance and embarked on a quest to harass Nicole during all her live reports. Nicole finally had a meltdown on camera, beating Randy and Earl with her microphone and sending her career down the tubes.("Harassed a Reporter").

Nicole is now #29 on Earl's list, so he and Randy visit her at the TV station. Nicole thinks she can redeem her career with a heartwarming story pulled from Earl's list, and he promises to help.

Nicole exclaims that she can't do a heartwarming story about a hooker. Earl comes up with a better story: he'll make up for the time he obliterated Earl Jr. and Dodge's beloved playhouse with his El Camino. Nicole loves the idea of building the kids a new playhouse, but informs Randy that he won't appear on camera, because it's not his story.

Later, Earl and Catalina are shocked to see Randy doing a "crazy head" routine on Nicole's weather report. Randy arrives at the motel wearing a sombrero to get his own news story, and when he does, he's going to make sure Earl's a part of it, because that's something Earl wouldn't do. Earl apologizes, promising Randy that they'll build the new playhouse together.

Nicole's not happy with Randy's participation, but Earl makes sure that Randy gets plenty of camera time. Later, everyone's at the Crab Shack to see Nicole's piece on the evening news. Nicole announces that Earl's heartwarming story is all about how he takes care of his mentally disabled brother, Randy. Embarrassed, Randy takes off.

Randy runs to the TV station to confront Nicole. She explains that she had to make the story more interesting, and all she did was make him look stupid on TV, just like he did to her; it's karma. Earl offers to ask Nicole to re-edit the piece, but Randy is satisfied - karma finally noticed him. Using their crazy arms, the brothers cross #29 off the list together. ("Harassed a Reporter").

Retrieved from "https://mynameisearl.fandom.com/wiki/Nicole_Moses?oldid=11316"
Community content is available under CC-BY-SA unless otherwise noted.