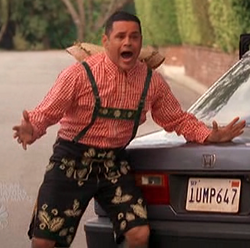 Paco is Earl's earlier roommate and the former lover of Catalina.

Earl and Randy moved into Frank and Paco's trailer at the Pimmit Hills Trailer Park after their dad kicked them out of their house, Paco spent most of his time crying over a picture of Catalina. Earl and Randy find out that Frank and Paco are also thieves when they tried to steal Yoshimitsu's watch, so they made a plan rob an Indian Casino the same evening Howie Mandel was going to preform then they'll be rich and Paco could send Catalina over to America. But the night before the robbery Earl got drunk and married Joy and Randy got distracted by an H.R. Pufnstuf marathon and forgot, so Frank and Paco grabbed Howie Mandel and drove away with the money. Paco who was driving spotted Catalina by the side of the road and took his eyes off the road causing him to crash into the FBI van that dropped off Darnell, Howie Mandel escaped but Frank and Paco got thrown into Prison for 20 years. ("The Frank Factor")

Paco auditioned to be in the "Scared Straight" program for the schools but didn't get the part. ("Randy in Charge")

When Frank escaped from prison, Earl went to Paco and saw he was writing music. Paco told Earl he was going to play it when he got out of prison to hear what it sounded like. When Earl asked where Frank would run to, Paco accidentally revealed that he and Frank hid money in the trailer, Earl left and Paco hoped his music would sound sad. ("Midnight Bun")

When the Warden destroyed Earl's certificates to get him out of prison early, Earl, Frank and Paco make a plan to escape by going through the ventilation system to the loading dock. As they were carrying out the plan Earl fell through the roof into the Warden's office but Frank and Paco carried on their escape and abandoned him, Darnell who knew about the escape goes to help Earl giving Frank and Paco the advantage to take Joy's nun outfit, hijack the van and drive away. Then Paco spots Catalina walking along side the road again causing him to drive on the wrong side and crash into a police car, Frank and Paco got thrown into prison again just as Earl was released. ("Early Release")

Because of prison overcrowding Frank and Paco got moved to a halfway house but were allowed outside for eight hours a day if they had a job, Paco got a job working for Camden foreign foods. As Paco was driving one day, he spotted Catalina again but this time he grabbed her attention before he parked the car instead of crashing. Paco then ran over to an overjoyed Catalina and the two of them kissed, reconciling their relationship. ("Love Octagon") Paco is not seen again after this episode.

Retrieved from "https://mynameisearl.fandom.com/wiki/Paco?oldid=13919"
Community content is available under CC-BY-SA unless otherwise noted.