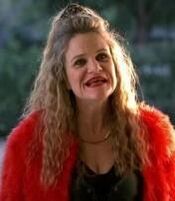 Patricia Michelle Weezmer , known commonly as Patty the Daytime Hooker is a prostitute in Camden County who provides sexual services and other fetishes at large discounts. She first appeared in the "Pilot" episode where every year, Earl had booked Patty for Randy's birthday.

When Earl first stared his list the first thing the first person he wanted to cross off was Kenny, after watching him for a few days Earl noticed Kenny seem lonely so he decided to get Patty to go round his house to have sex with him but because Kenny was gay he wasn't interested in her ("Pilot").

Patty was one of the guests invited to Joy and Darnell's wedding ("Joy's Wedding").

Billy Reed had paid Patty to let him suck her feet in his car. when Billy was about to do so Patty saw his ferret and freaked out ("Dad's Car").

While Patty was being charged for taking money for sex, she clarified to the judge what she did exchange sex for; She was taking burgers for sex, curly fries for a diddle, and a pickle for a lookey. It was her Tuesday afternoon special. Her attorney asks for a plea bargain, and the Judge grants a five minute recess. Later, she runs from the Judges chambers yelling "Outta my way, I'm not going to jail for a cheeseburger-handy!" She then gets tackled by two bailiffs. After the recess the Prosecutor accuses Patty of soliciting sex from a uniformed officer in the middle of the day. Patty says that is a lie. The Prosecutor then plays Police Dash Cam footage of Patty on the hood of the car asking "I know you're a uniformed officer, and it's the middle of the day, but would you like to have sex with me for money?" Her counsel resigns. The Judge sentences her to a $500 fine in which she asks "Any chance you want to take it out in trade? I'll let you take a ride the 'Patty-wagon", Whooo!" ("BB").

Earl was trying to return $10 he stole from Paul but didn’t know who he was at the time as he didn’t see his face, luckily Iqball still kept security tapes on the day it happened. Iqball didn’t speak English at the time so Patty had to translate everything he said to Earl. As they were looking at the tapes Iqball saw footage of Patty giving him horse rides around the store and told Earl to fast forward that part, Patty told him he had nothing to be ashamed about. Earl soon recognised Paul on the footage and so did Patty as they were in the same book club. While Joy was doing Patty's nails she tells her to stop biting on them, Patty replies "Don't tell me, tell the Mayor, he's a nibbler." After Earl had lost his lottery ticket it landed near Patty but she didn't notice it and the ticket flew away again ("Number One").

Catalina revealed that Patty used her picture for her newspaper ad to have sex with guys ("B.L.O.W.")

Patty was seen on first episode of “Cops” filmed in Camden County making out with Willie in a photo booth and getting her hand stuck in a vending machine ("Our 'Cops' Is On!").

Earl was trying to make up to Nicole Moses for ruining her career by doing news article for his list. Nicole asked Earl how he chose a list item Earl said he would sometimes he would close his eyes and point to one, Nicole noticed he pointed to an item that said he coasted a woman a client and asked Earl to take her to the woman. The woman turned out to be Patty, when Nicole found out Patty was a hooker she was not happy as she wanted her story to be heart-warming ("Harassed a Reporter").

When Earl was recalling how he met Frank Stump, it was seen that Frank was one the one that introduced Patty to Earl and Randy ("The Frank Factor").

Patty was seen on the second episode of “Cops” filmed in Camden County, she was supposed to be in charge of a win a truck contest but the car dealership backed out so donated herself and the winner got her for an hour. When Stuart and Jeff announced that they could be a terrorist attack after Earl and Randy stole some of their equipment and fireworks, Patty ran away from the fair with three guys with their hands still on her ("Our Other 'Cops' Is On! (Part 1)").

Patty was so scared about the possible terrorist attack she decided to keep her next baby, two of the guys with their hands on her walked away but William who had glued his hand on to her couldn’t get away. William’s hand was still stuck on Patty when the fireworks went off at night ("Our Other 'Cops' Is On! (Part 2)").

Patty saw Randy taking Earl back to the motel in a shopping trolley when the hospital kicked him out when he was still in a coma and sold him a wheelchair to transport Earl around that she got from a pimp friend ("Killerball").

When Carl Hickey split from his wife, he went to see Patty, thinking she was a simple waitress, but Earl told him that Patty was a prostitute. Carl went back to Earl’s car refusing to have revenge sex if he had to pay for it("Monkeys Take a Bath").

Patty was trapped in a phone booth due to an outbreak of killer bees with Darnell, Catalina and Kenny James in 2000, a while before they all knew each other. During this time, Patty agreed to have sex with Darnell without charging him for it; something she had always wanted to do. ("Earl and Joy's Anniversary").

Patty took Catalina’s handbag when she found it on the ground after a tornado as decide to keep it, but after someone took one of Catalina’s shoe she got mad. Then Catalina found a gun under a coat and threaten Catalina and the man to give her things back then made everyone give everything, Patty told everybody to do what Catalina said as gun rule jump tornado rules. When Catalina had almost retrieved everything another tornado picked up and a bible knocked the gun out of her hand, she thought it was a sign from God to change her ways but Patty thought the bible was meant to hit her instead because she once got pregnant with the devil’s baby and explained the devil was the mascot at the local junior college. When a third tornado picked up Catalina and Patty went outside to ask God what he wanted them to do, the bible was taken away from them and saw a flying boat which they thought was the sign. They found the boat and stood in it, when Earl and Randy pasted they told them they needed two men to repopulate the Earth, and lured them in with kidneys they thought were steaks. Joy pasted them with Darnell to take him to the hospital when the fourth tornado hit which was bigger than the other three, Joy went to hide in a nearby church cellar and Randy followed, Patty decided not stay in the boat with Catalina because she didn't want to die ("Nature's Game Show").

Patty was caught by Grizelda Weezmer and thrown in her basement along with Earl, Randy, Stuart, Kenny, Joy, Darnell and Catalina. She revealed that Grizelda was her mom and she took her dad’s side when her parents got divorced. Grizelda told them that she was going to stab one of them to make room for another victim to make everyone who called her a crazy witch lady pay, she ended up stabbing Earl after he stood up, apologized and try to convince her she wasn’t crazy. Patty threw one of her shoes at her mom to knock her out. Afterwards Grizelda was put in a home to for the mentally insane to get well again and Patty came to visit her every day until she transformed into a friendly, harmless, and contributing member of society once again ("Witch Lady").

Patty was seen on the Inside Probe episode revealing how Ernie Belcher was killed as he was one of her customers ("Inside Probe (Part 1)").

When Patty heard the story that Earl and Randy had killed Ernie she told the film crew she hoped the brothers fried for what they did to Ernie as she was going to miss him. She also revealed she believed in alien life. A camera found in the girls bathroom in the Crab Shack showed Patty coming out of a stall with four other guys ("Inside Probe (Part 2)").

Appearances in other mediaEdit

Patty appears in an episode of Raising Hope where she is from Camden County.

Retrieved from "https://mynameisearl.fandom.com/wiki/Patty_Weezmer?oldid=13861"
Community content is available under CC-BY-SA unless otherwise noted.