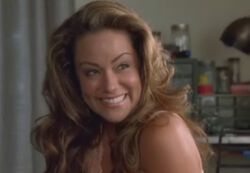 Sheila was Sweet Johnny's girlfriend who had sex with Earl Hickey.

Sheila was Sweet Johnny's girlfriend and supported his crazy stunts despite his many injuries. However, she was charmed by Earl and they began an affair, which carried on for a long time when Earl kept convincing Johnny to do crazy stunts. However, Earl began to feel bad and ended the affair and left Sheila with Johnny.

A short time later, Johnny suffered a head injury, causing him to think the same day was repeating over and over. Sheila stayed with him for several years after the accident. However, Johnny had his accident the same summer "Living la vida loca" became popular, and therefore got the song stuck in his head. Sheila couldn't stand him singing the song over and over, so she left him. Johnny still believes that he is with Sheila.

Earl went to see Sheila to ask her what was wrong with Johnny, and she explained the accident. Earl noticed that her buttocks had increased greatly in size (with their original size being something that greatly interested him in her in the first place), and she encouraged him to squeeze them "for old times sake". Earl told Johnny about the affair, and he became angered. He also told Johnny about his memory loss, forcing him to try to commit suicide in a crazy final stunt.

Earl managed to stop him, with the help of Joy, and Johnny went back to his routine of repeating the same day over and over again ("Sweet Johnny").

Retrieved from "https://mynameisearl.fandom.com/wiki/Sheila?oldid=12507"
Community content is available under CC-BY-SA unless otherwise noted.