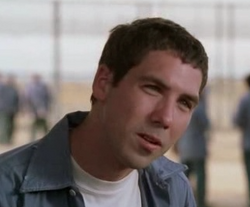 Sonny is one of Earl's friends

Sonny and Earl played a game called beer can tag which involved throwing beer cans at each other, Sonny got Earl in the Crab Shack and Earl got Sonny while is was riding his motorcycle. When Sonny saw Earl outside Kenny's house he told him about a house that was worth stealing from and promised not to ditch him and Randy to go to a strip club like last time but Earl told him he's no longer stealing as he's now found Karma.("Pilot") After that Sonny disappeared and no one knew what had happened to him.

The reason for Sonny's disappearance was because he had been put in prison for two years for hitting a cop with an empty beer can, wrestling his gun away and then drove around with him in the trunk of his own car for a few hours. He spotted Earl walking around prison and threw a beer can at him to grab his attention, he taught Earl how to survive in prison by being invisible and told him to avoid taking candy bars from other prisoners as they expected favors and those could get him killed. As they were both hiding Earl spotted Glen Shipley who was on The List but was too scared to help him, while Earl had his back turned Sonny ratted him out as he owned Glen a favor, Glen ran towards Earl but got tackled by the guards and thrown in the hotbox. Earl was angry with Sonny for ratting him out to Glen and dragged him out from under his bed, Sonny begged him to not blow his cover Earl did and looked away, then asked what they were going to do but Sonny had already run off.("My Name Is Inmate 28301-016 (Part 1)")

After Earl got stabbed by Glen by giving him a shiv, Sonny told him every time Glen gets out on parole he kept breaking a rule that keep him getting out of prison and that there were a lot of guys in prisons that didn't have well thought out plans. ("My Name Is Inmate 28301-016 (Part 2)")

When the prison writing teacher challenges her class to write a story about themselves doing anything they want Sonny writes a story about beating up a gymnast as he hated them, when Earl can't think what to write down Sonny tells him to close his eyes and enter his imagination. Earl ends up writing a story about what he would do if he could do anything in the world and when he read it to the class Sonny asked Earl to read the part about how the chicken wings tasted again.("Creative Writing")

Retrieved from "https://mynameisearl.fandom.com/wiki/Sonny?oldid=13176"
Community content is available under CC-BY-SA unless otherwise noted.