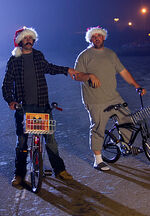 Earl and Randy decided to make a beer run on the night of Christmas Eve but were too drunk to drive so Earl had an idea to ride the bikes that were meant to be Dodge and Earl Jr.'s Christmas present but were so drunk that they crashed while riding them. Earl then got them new bikes for Christmas after he wrote his list.