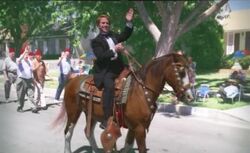 One night ten years ago, a drunken Earl needed a ride home. When he spotted a "giant dog" (a horse) he took advantage of the transportation, depriving dying Make-A-Wish kid Buddy of his pony ride in the 1999 New Year's Day parade. Buddy is dead, but Earl decides to do something for his parents.

As luck would have it, Buddy is still alive, and he knows just what Earl can do for him. A rabid movie fan, Buddy has written a script about international spy Max Patrick, who takes down a giant squid. He will direct and star, and Earl can produce.

Everyone in town shows up to the premiere party... except Buddy. Sadly, he has succumbed to his disease. Buddy's mom assures Earl that Buddy died happy, since all his crazy dreams came true while filming the movie: he met the president, saved the world from a giant squid, and finally got to ride that horse in a parade.