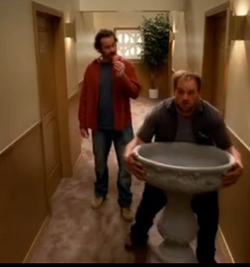 Stole a birdbath out of a pickup truck[]

Earl made Randy carry a birdbath round a building asking people asking if it was their birdbath Earl stole because he thought it was Randy's fault he turned out the way he did.