Start a Wiki
Will 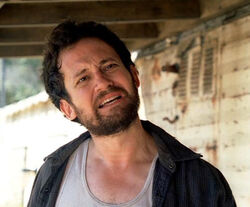 Will was a personal trainer who used to work with Wendy before quitting his job. He lived in the Trailer Park.

Wendy and Will were close, as they both were fitness trainers. They started to become close, but both were embarassed about revealing their true feeling to one another, and so neither did. Will wrote a letter explaining his feelings, but it never got mailed becaused of Earl. After this, Will became depressed, quit his job and never saw Wendy again. He became unfit and scrawny ("Mailbox").

Earl wanted to help Will for causing the rift between him and Wendy, and so agreed to watch her whilst Will got himself prepared to see her again. Whilst Will got fit, ready to see Wendy, Earl developed feelings for Wendy and they planned a date. Catalina heard about this and wanted to stop Earl and she was helping him complete the item to help her feel good. She told Will to go along to Wendy and Earl's date, and Wendy admitted her true feelings for Will and left Earl.

Retrieved from "https://mynameisearl.fandom.com/wiki/Will?oldid=11328"
Community content is available under CC-BY-SA unless otherwise noted.